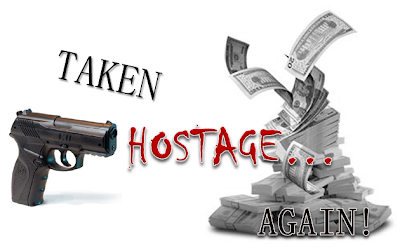 Is it me or am I like missing something here? Wasn’t there already a government plan to boost the economy?  You remember don’t ya? A group of bankers got together with an ingenious scheme. If they pulled it off, it would go down in history as the biggest bank robbery of all time. If a success, they’d be in a whole other league of their own. Even Bonnie and Clyde would roll over in their graves. Butch Cassidy and the Sundance kid would look like a bunch of Cub Scouts.
The uncanny plan permitted the sinister criminals to receive a blank check. Under threat of Martial Law, Congress was taken hostage and forced to pass the buck; making the robbery perfectly legal. Surprisingly, they pulled it off! At the stroke of the pen, most Americans awoke to find their savings being virtually wiped clean. Retirement funds along with 401k savings were stolen by the powers that be. The American people lost thousands of dollars while the greedy bankers hit it big.
Just when you thought it was safe to enter the water, seems the sharks are back in seconds. Sort of like déjà vu all over again. Another big heist seems to be in the making. If something is not done quickly, the Government is going to be “maxed out!” That is because the debt ceiling has reached a whopping $14.294 Trillion dollars.  This is the maximum amount Congress will allow the Government to spend.  Most Republicans don’t want to raise the roof unless the current administration agrees to cut spending. If both sides cannot come to some common ground the United States will go default! What does this mean for us? Well according to Tim Geithner (Treasury Secretary) the outcome would be “catastrophic economic consequences for citizens.” Others are saying this will be financial Armageddon for the U.S! I say…it will be the orchestrated total collapse of the U.S. economy!
To really fix the issue at hand, it doesn’t take a rocket scientist to figure out a solution. Even I can figure this one out. Common sense says just stop funding other countries. Reduce spending, they say. Then bring the troops home! Did you know that just in one day the United States spends about 2.5 billion on the multi-front wars? Oh yeah, that is a lot of money. These robbers want to kick us when we’re already down. See stealing people’s retirement funds just was not enough, now they want more money. Many are being taken to the laundry hung out to dry! On top of all that they want to cut Social Security and Medicaid! The cuts won’t stop there though, soon I think we will see major cuts in the education department.

This entire charade is a planned total economic crash! “If it happens you can bet it was planned that way.” Yep, Franklin D Roosevelt spoke much when he said that. The crash is inevitable to occur! The economic meltdown has been a slow moving storm that is not letting up. Actually this storm is building in momentum. As we know history always repeats itself.  When the roof is about to collapse don’t add more to it, duh, it’s gonna crumble. Whatever the outcome may be this coming August 2nd, I assure you it will only buy a little more time.