As many of you know this past year has been one trial after another for the F.O.Y.ministry. Yahuwah has shown us exceptional mercy while performing miraculous miracles. He revealed to us years ago, that our journey here on planet earth, is likened unto a wild roller coaster ride! Indeed whatever He speaks, it comes to pass! 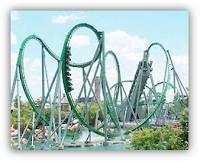 Just like the amusement park ride, our journey has had many inclines, dips, curves and loops. We have lived through the most testing of times. From our experiences, when all hope seems to be gone, those are the moments when Yahuwah works in the most supernatural of ways.  As promised the Mighty One of Yisra’el has never left nor forsaken us. These tests, no matter how small, large, short or at great lengths is when our mustard seed of faith grows.
No matter the turn, curve or the many dips you are embarking on, know that Yahuwah is in control. Through your belief in Yahushua you shall be an Overcomer!
“These things I have spoken unto you, that in me you might have peace. In the world you shall have tribulation: but be good cheer; I have overcome the world.” -John 16:33
These tests and obstacles are character building blocks! Despite your present circumstance, lean not on your own understanding but in all ways continue to trust that Yahuwah is in control (Proverbs 3:5). Yes you can rejoice knowing that something far better awaits you, your loved ones and the rest of us peculiar people.
“And not only this, but we also exult in pressures, knowing that pressure works endurance; and endurance, approvedness; and approvedness, expectation. And expectation does not disappoint, because the love of Elohim has been poured out in our hearts by the Set-apart Spirit which was given to us.”–Romans 5:3-5
Some of you might be thinking, “Yeah, yeah…I know all this but I can’t take anymore!” or “You just don’t understand my situation” or how about “You never walk a mile in my shoes.”
You’re right; I never walked in your shoes. I don’t need to understand your situation. And yes you can take more. I know this because we are told the following:
“No trial has overtaken you except such as in common to man and Yahuwah is trustworthy, who shall not allow you to be tried beyond what you are able, but with the trial shall also make the way of escape, enabling you to bear it.” -1 Co. 10:13 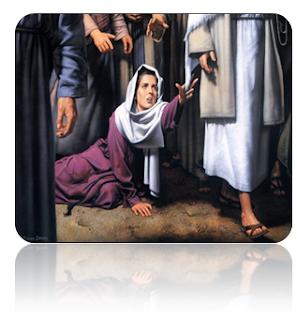 “And a certain woman had a flow of blood for twelve, years, and had suffered much from many physicians, and spent all that she had and was no better, but rather became worse. Having heard about Yahushua, she came behind Him in the crowd and touched His garment, for she said, “If I only touch His garments, I shall be made well.” And immediately the fountain of her blood was dried up, and she felt in her body that she was healed of the affliction. And immediately Yahushua knowing in Himself that power had gone out of Him, turned around in the crowd and said, “Who touched My garments?” And His taught ones said to Him, “You see the crowd is thronging You, and You say, ‘Who touched Me?’ “And He was looking around to see her who did this. And the woman, fearing and trembling, knowing what was done to her, came and fell down before Him and spoke to Him all the truth. And He said to her, “Daughter, your belief has healed you. Go in peace, and be relieved from your affliction.” —Mathew 5:25-34
HalleluYah! I cry tears of joy. I’ve often wondered when she woke up that morning if she knew that day would be the day she would be healed! I hope this woman has inspired you to continue on trusting, believing and hoping for your day to come. 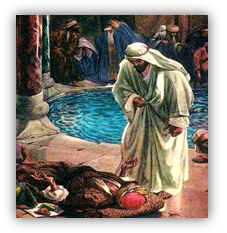 The woman with the issue of blood was not the only one to suffer greatly. Scriptures describe a poor man that was diseased for thirty-eight years. He lay by the healing pool called Bethesda hoping to be healed. As it turns out, a great number of other people who were sick, blind, crippled, paralyzed was also waiting to be healed (John 5:3).  These suffering people would patiently wait for the moving of the water and who ever got in the water first would be cured of their disease (John 5:4).
This man was so sick he could not make it to the pool and no one would put him in the water. Scriptures don’t tell us if this man was dropped off every morning or if he more or less lived there. What we do know is Yahushua told him:
“Do you wish to become well?” The sick man answered Him, “Master, I have no man to put me into the pool when the water is stirred, but while I am coming, another steps down before me.” Yahushua said to him, “Rise, take up your bed and walk” And immediately the man became well, and he took up his bed and was walking….” John 5:6-9
Brothers and sisters thirty-eight years is a very long time to be sick. Yet he was cured. Yahuwah’s timing is perfect. Let us not forget the poor woman who was bent over for eighteen long years (Luke 13:11)! We must be patient.  Each of us has obstacles to overcome. Being believers we were never promised a bed of roses but we were promised a way to endure. Trust me, the trials and tribulations you are experiencing are molding, shaping and teaching you. To learn on why we suffering read, “Why must we suffer?”
I wanted to take this time and deeply thank each of you for praying for me. Words will never fully express how thankful I am. If you have not yet been to the F.O.Y. Global Prayer Network please check it out. If you have a prayer request you can post your request. You can be assured there are faithful prayer warriors out there.  Not only is this Blog good for those who need prayer but when I was in bed, praying for others greatly helped me. 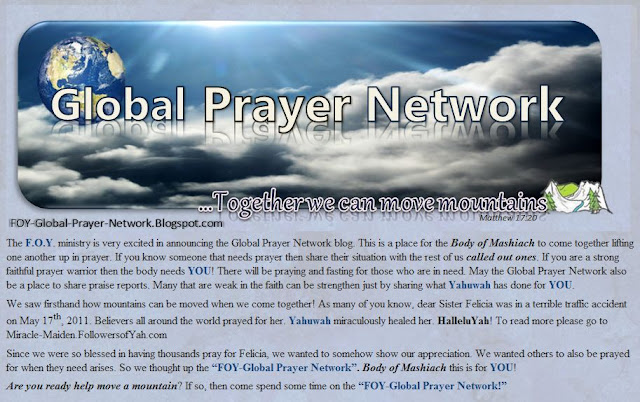 One thought on “Rise Up My Child… I heal you!”