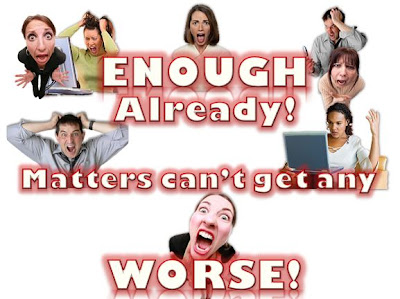 There comes a time when any rational human being feels like standing on the rooftop with a blow horn screaming at the top of their lungs, “ENOUGH ALREADY! I’m sure you’ve been there, possibly even done that. You know the feeling, it’s like nobody is out there!  Let’s face the fact, that this world has become nothing but inhabitants of every abominable and detestable act known to man.


Hurry, pinch me, shake me, do something cause for a second I forgot I was living in the 21 century. If I had not known better I would have thought I entered into some time machine. Dropped off right dead smack in the midst of Sodom and Gomorrah living with Grandpa Noah. Truly, we are living in very strange days. If it weren’t for the Scriptures telling me ‘there is no new matter under the sun’ (Ecclesiastes 1:9) I would have thought mankind missed the bus and overnight became exceedingly evil. Yet, Scriptures do say that “because of the increase of lawlessness the love of many will become cold” (Mathew 24:12) and “that evil men will grow worse and worse” (2 Timothy 3:13). Vast amounts have truly had their conscience seared with a hot iron (1 Timothy 4:2) not knowing the head from the tail. We are no doubt living in the most evil and vile days known to man.

In light of current events, it seems the world has spiraled out of control. At never before speed, deep levels of insanity is almost reaching the point of no return. Mostly everybody and their neighbor seem to have gone rabid. Flipping through the channels on any given day and at all hours reveal the levels of extremely disturbing human behavior.

Shout it out, notify somebody, anybody, “There’s been a breach amongst the human’s as all out animal instincts have taken over.” Rioting, stealing, rapes, beatings, injustices, drug use, binge drinking along with murdering, debauchery, children ruling the parents, no respect or kindness to others, abortions, gay marriages, whoring and just when you think matters could not possibly get worse…well guess what…THEY HAVE!

Who’d every think the terrible day would come when wicked men would conjure up something so pathetic, so wicked that even in my wildest dreams I would have never thought mankind could stoop so low.

The following information will be shocking, appalling, disgraceful, shameful, repulsive, disturbing, horrific, alarming and downright abominable. Brace yourselves because one of the most famous soda company’s in the world, Pepsi cola has crossed the lined! The reports say that PepsiCo has joined up with a biotech company called, Senomyx.( file:///H:/Pictures/synoxm/Senomyx%20%20Technology%20%20Our%20Technology.htm) The demonically insane dual, is going to the extreme in finding and trying out new artificial flavor enhancers. These flavor research programs are based on using isolated human taste receptors. In other words, brothers and sisters, these additives come from using fetal cells from abortions. You read it right; PepsiCo is using aborted fetal cells to come up with a tastier beverage that is lower in sugar and salt. This healthier drink is far more dangerous than anything before. My opinion, is that these companies have made a pack with the devil! 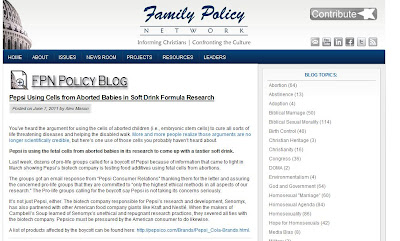 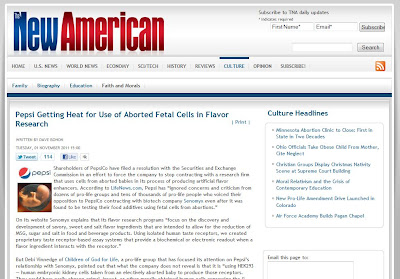 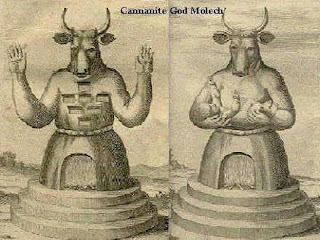 Not only are the remains of these innocent aborted children being exploited downright repulsive but this goes much  deeper. Let me further explain. From times of old, various religious groups have been performing human sacrifice. These barbaric tribes actually permitted; encouraged and believed that the act of offering up a human would appease their many gods. I must admit, I for one do not fully understand how high up or for that matter, even low level occult rituals actually work, maybe not knowing is best.

However, the little I do know is that when an innocent child was involved, somehow the sacrifice was considered more sacred.  This whole wicked human child sacrificing is in fact a pagan satanic cult religion. I’m not going to go into great detail of how once a year the elite of the elite gather at Bohemia Grove. Behind tall trees the wealthy of the world do mock human sacrificing to appease the owl demon Baal Moleck. What we are actually dealing with here is much more horrific.  Millions of innocent children are being passed through the fire in abortions to appease Molech. 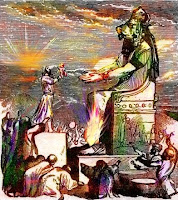 This is nothing knew as during the Scriptures days, mothers and fathers would offer their child up to the god known as Baal Molech/Moloch. This Ammonites heathen god was depicted as half human half animal with arms outstretched to hold the innocent victim. Under and sometimes within the idol the pagan worshipers would start a fire. As the flames grew larger and larger the child would burn to death. Yahuwah gave clear warning that Israel, along with the stranger, should not offer up or cause their son or daughter to pass through the fire to Baal Molech. 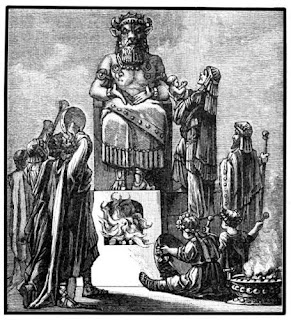 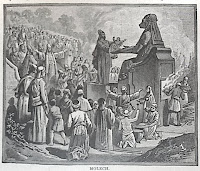 Clearly, we are not to cause children to pass through the fire or to be killed to a man-made false god called Baal Molech. Yahuwah actually calls this an abomination (1 Kings 11:7, Jeremiah 32:35). Sadly, despite Yahuwah’s warning, the children of Israel practiced this heathen practice of killing their innocent children. Even King Shelomoh was known to have build a high place so that his foreign wives could burn incense and slaughter to Baal Molech (1 Kings 11:7-10) amongst other pagan deities. To this day, the selfish act of killing an innocent child while yet in the womb is a demonic ritual killing.
Scriptures tells us:

“Before I formed you in the belly I knew you, and before you came out of the womb I did set you apart-I appointed you a prophet to nations.” –Jeremiah 1:5

Not everyone has been pre-appointed to be a prophet like Yirmeyahu, however the point here is that Yahuwah knows each of us before He places us in our mother’s womb. Life begins while in the womb. 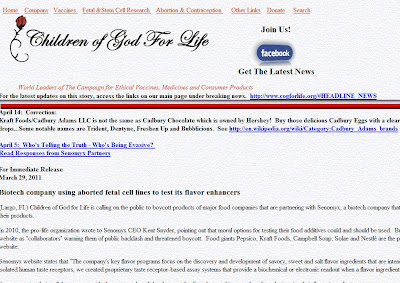 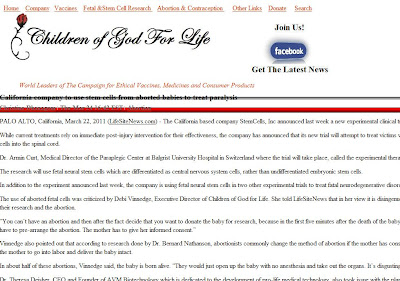 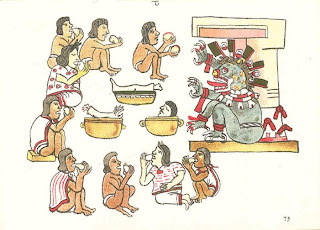 While all this is disturbing, using aborted fetal cells in food and beverages goes beyond grotesque. Actually to me, this is a form of cannibalism. Bare with me, you see there are many different reasons for cannibalism. The reason that needs to be emphasis here is that cannibalism is a ritual practice. To them, taking an innocent child that was used in a ritual killing makes the act more sacred. In the event that child is then consumed the person is believed to absorb the dead person’s traits. (http://en.wikipedia.orgwikiCannibalism#cite_note-94). 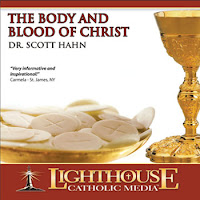 That is why some barbaric tribes believe if a human is god then by eating that human they will become immortal themselves. This same theme is thus carried into the Christ Mass. The priest preforms some hocus pocus and the Eucharist literal becomes the flesh and the wine the blood of Christ!  This is beyond twisted. People are not to eat people just like cattle is not to eat cattle. Need we be reminded of how many cows are suffering from a deadly disease called ‘Mad Cow?’ Setting all scientific words to the side the main cause of this disease is from cows eating cow protein! This sinister scheme will cause devastating result on the human body and this entire world.

To me, it seems bizarre taking a murdered baby, and then using any part of that fetus to be consumed is pure madness! The consequences of this horrific ordeal will be demoralizing.  Just from previous trials of using aborted fetal cells to try to cure diseases such as those suffering with being paralyzed or Parkinson’s disease have had disastrous side effects for patients. 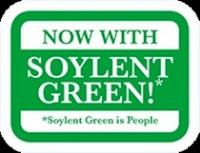 These mad scientists have entered a point of no return. They have broken a breach that should have never ever been messed with. This is very dangerous stuff! I might ad,d that all this genetic modifying of mixing DNA was actually going on during the time of Noah as outlined in the Book of Jasher:

“and the sons of men in those days took from the cattle of the earth, the beasts of the field and the fowls of the air, and taught that mixture of animals of one species with the other, in order therewith to provoke Yahuwah.”
–Jasher 4:18

During the time of Noah, mankind was not fully made in the image of Eloah anymore. See, woman had sexual relations with the Son’s of Elohim. The result, the offspring were hybrids. Noah was found to be perfect in his generations (Gen. 6:9). The reason why he was perfect is because his DNA had not been altered. To further explain, Noah like all of us had sinned (Mark 10:18) and also fallen short of the esteem of Yahuwah (Romans 3:23).  Therefore, his perfection was found in his genetic make up. Yahuwah protected mankind through Noah’s lineage while destroying the rest in the flood (Gen. 6:13).
When the early taught ones asked Yahushua what signs would be eminent at his return, one sign He gave was ‘as the days of Noah’ (Matthew 24:37). Understanding the depths of the mixing of animal along with human DNA clearly, anyone can see ‘the days of Noah are here!’ Man playing god and messing with DNA is their brand of evolution. 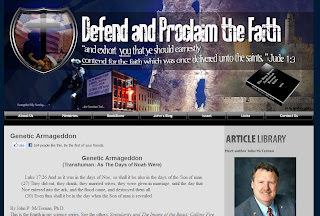 Article describing the mixing of DNA. 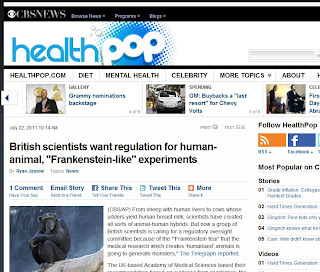 These mad scientists will continue to make the same mistakes as times of old. They continue to go deeper and deeper into areas they ought not to go. The fact remains these companies could use other sources such as bug, insect or other animals yet they insist on using aborted fetal cells.
I know right about now you are turning red in the face throwing your hands up in the air shouting, “Enough already!” I agree with you that this madness has got to stop. Clearly these companies have crossed a line that can never be erased from our memories! Once the Seventh Trumpet sounds, the mocking of the Mighty One of Yisra’el along with playing god will stop.

While we patiently wait for Seventh Trump, there are a few rational things each of us can do. First and foremost us called out ones cannot eat this food! Do not spend your hard working money on these products nor support these companies. No way!!!!!!!! Secondly I say, “Rise Up children of the Most High, it’s high time we start a nationwide boycott! That is right, Boycott all products! Any and all companies that chose to follow this technology of using aborted babies cell. Thirdly, Ephesians chapter five verse eleven tells us, we are to have no fellowship with the fruitless works of darkness rather we are to expose them. So take your part by telling everyone you know about this wickedness. Use the internet, different chat rooms, and forums, face book, take it all through cyberspace. You can also share this information with people you meet on the streets, and in grocery stores. Make a stand! Lastly, try to understand, despite this evil wicked generation Scriptures tell us that vengeance does belong to Yahuwah (Romans 12:19), comprehending this should allow each of us to fully rest each night knowing that Yahuwah is in control. No matter how good or how evil, nothing occurs without Him knowing about it.  This battle down here is not against flesh and blood but against spiritual wickedness in high places (Ephesians 6:12). Therefore we must also fight this battle in the spirit realm! My prayer is that each of us called out ones can be empowered by the Ruach Ha Qodesh in overcoming these foods and drinks.  It may take some time adjusting to not purchasing these foods and drinks, however with perseverance and much prayer we shall be able to overcome!
Please take the time out to print the list and take it with you the next time you go shopping. Pepsico is not the only company that is doing this.  Kraft along with Nestle is also doing this. The following is a list of foods and beverages from these companies:
Some other links that you may find interesting:
Action Alert
Bovine Growth Hormone
VIEW A LIST OF FOOD PRODUCTS THAT MAY BE INFECTED Written By L. McGuire