“For there shall be a time when they shall not bear sound teaching, but according to their own desires, they shall heap up for themselves teachers tickling the ear.” -2 Timothy 4:3

From the bottom to the top and everything in between the world has found multiple teachers to do just that…’tickle the ears’! With His recent statements, the first Jesuit Pope has managed to jump start the great apostasy (the great falling away) by trying to erase the faith that was once delivered thousands of years ago (Jude 1:3). 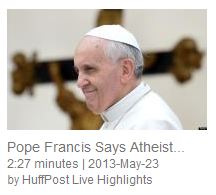 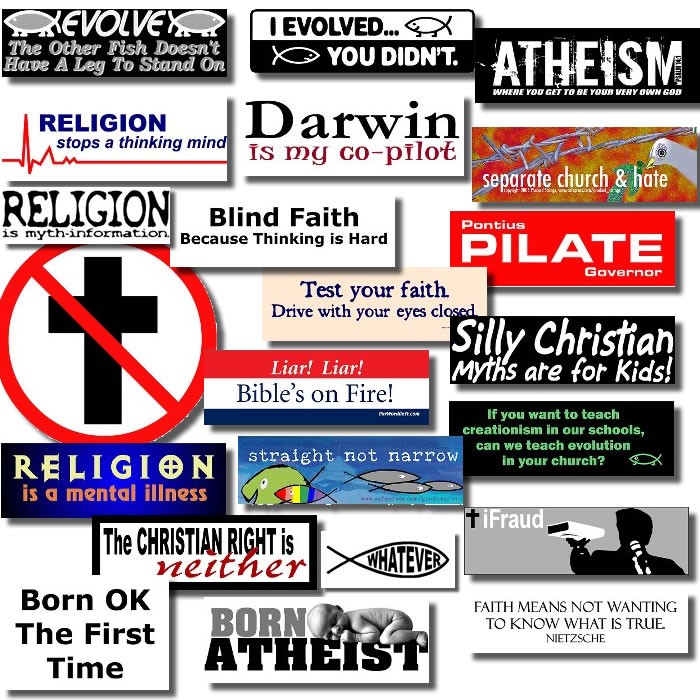 To declare all atheists that do good and not evil shall be redeemed, that is saved, is heresy of the utmost. To preach this from the ivory towers of the Vatican, the great whore herself is thus, nullifying the Word of Yahuwah.

Though it is factual, Yahushua did indeed redeem the entire world; Scriptures clearly state that all who believe in Yahushua shall be saved! Yahushua even told us what would happen to those who deny Him:

“But whoever shall deny Me before men, him I shall also deny before My Father who is in the heavens. “ –Matthew 10:33

In order to receive salvation one must acknowledge, believe in and accept the atoning blood of the true Passover Lamb, Yahushua! Atheists don’t believe, therefore, to them, they don’t need Yahushua!

More from the article:

“Atheists should be seen as good people if they do good, Pope Francis said on Wednesday in his latest urging that people of all religions – or no religion – work together.”

Let us remember that it was Yahushua that declared, “no one is good except One-Elohim.” (Mark 10:18) To further expound on this, Scriptures tell us that “there is none righteous, no, not one!” (Romans 3:10) And we have also been told that “…Elohim be true, and end every man is a liar…” (Romans 3:4)

These claims that one does not need to believe in Yahushua to achieve salvation is the utmost heresy. Brothers and Sisters, this is a message of world unity. Let us not forget that it has been written that all nations, tongues and creeds will embrace the coming Imposter. The Pope is preparing the entire world for this horrific time. That is why He has been calling for all religions to unite just as his processor: 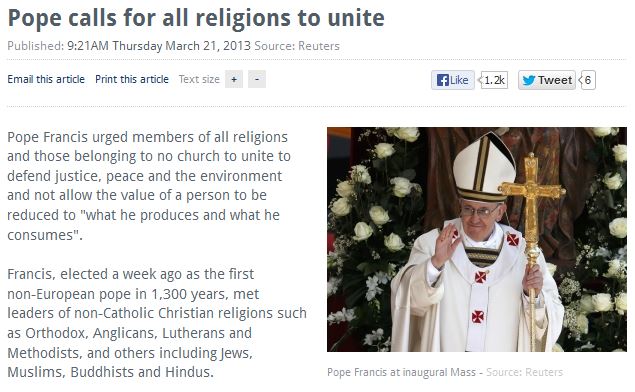 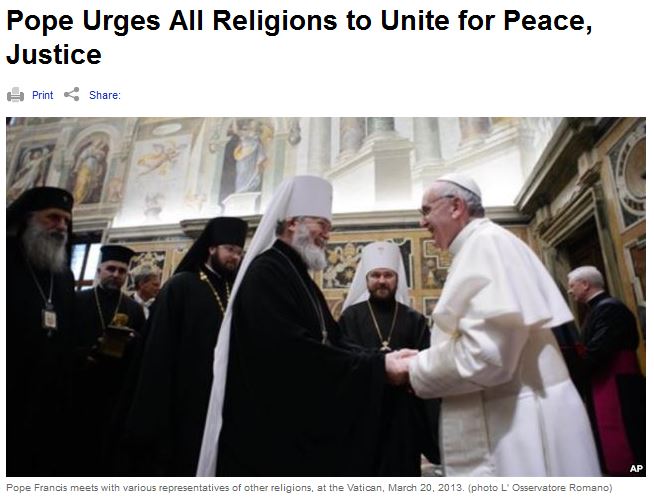 Once the mechanism of a one world system which includes a global currency along with a set of universal laws to govern humanity has been started, there is no stopping it. What better way to unite the entire world than to proclaim, “Being good is good enough! Just follow the golden deed path straight into heaven!” 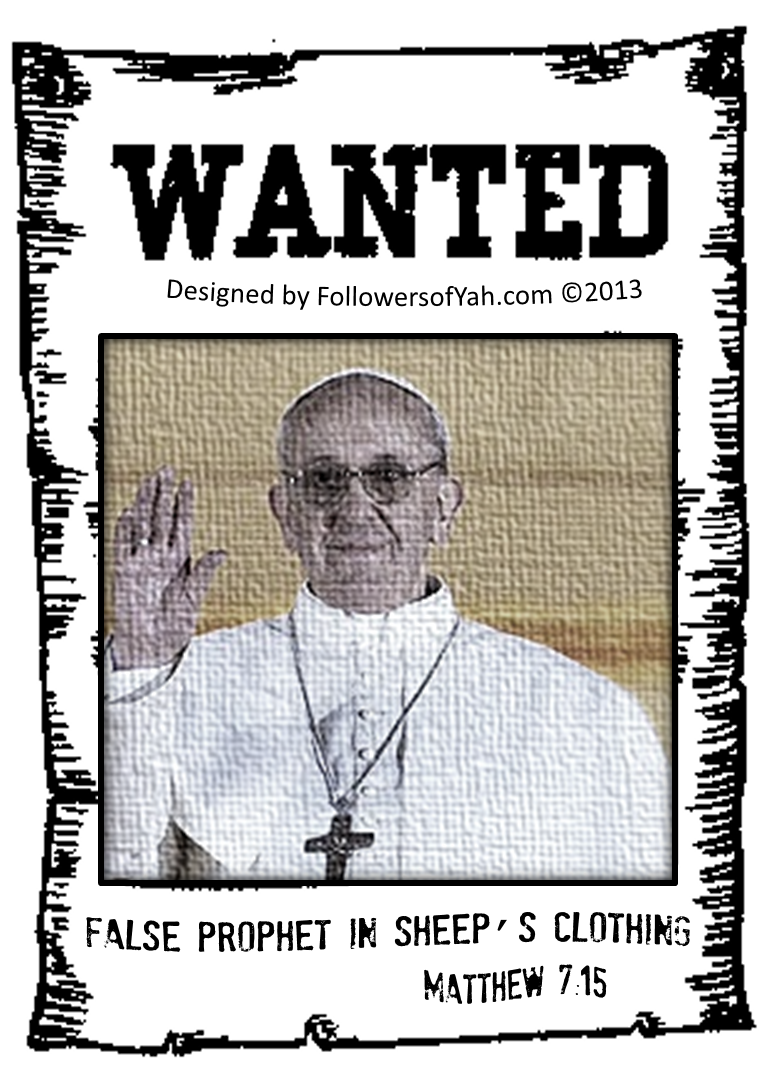 Yahushua clearly told us that, “I am the Way, and the Truth, and the Life. No one comes to the Father except through Me.”
–John 14:6

He further warned us that we should:

The very next verse He also told us to beware of false prophets that come to us in sheep’s clothing. I speak a truth; much mercy has been given to us. Each of us has a lot to be thankful for. Yahushua loved us enough to forewarn us of these matters which are rapidly unfolding before our eyes. 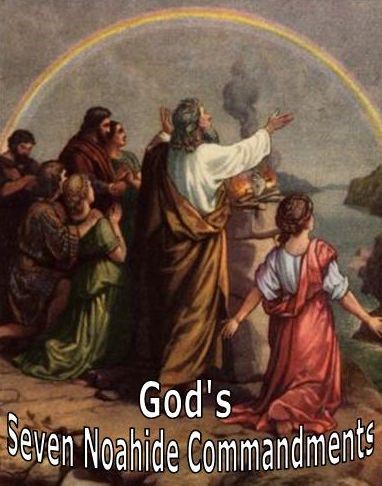 The problem now arises with this heresy is, ‘just who defines what good is?”  Pope Francis? The United Nations? How about the Global Elite? Who or what entity will be the keeper of the moral code? Better yet, ponder how can one get an atheist to follow a set of laws especially if they do not even believe in a god? Simple, have them follow the moral laws of mankind. What are these moral laws? I guarantee that the moral laws will be very sinister and lamb like (meaning they will appear to be of Eloah) when in reality will do away with Yahuwah’s Ten Commandments (our marriage vows). Which laws appear to come out of the Tanak, but in reality are man-made?The Noahide Laws of course! These counterfeit laws will no doubt play a major part in the Great Apostasy. 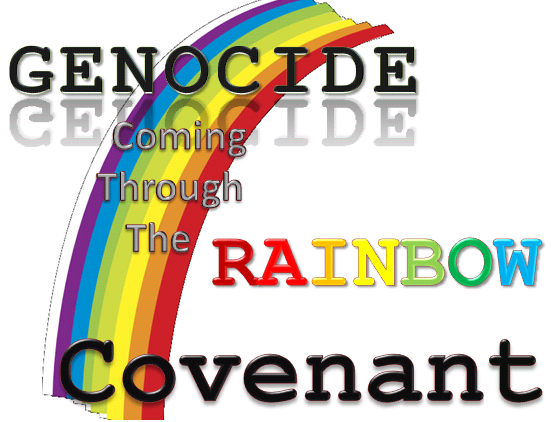 I beseech you to perceive the writing on the wall! In order to achieve global peace there must be a set of universal laws that everyone must abide by. These Noahide Laws go by other names such as moral laws, human right laws. They appear to be lamb like but in reality they replace the Ten Commandments of Yahuwah. The Noahide Laws are extremely dangerous as all those who refuse to comply will be found under penalty of death. (Genocide coming through the Rainbow Covenant). All dissenters will be called evil doers! I am thus reminded:

“Woe to those who call evil good, and good evil; who put darkness for light, and light for darkness; who put bitter for sweet, and sweet for bitter!” (-Yeshayahu|Isaiah 5:20)

Need I remind everyone that just a few years ago the Vatican along with the Pope embraced the Noahide Laws themselves? Once the first act started they announced that the Sacred Name of the Creator could not be spoken during mass, worship services prayers, and songs.

We now see that line being drawn in the sand that the false prophet is stating all men can be good just by being good. And the Noahide Laws will indeed be the universal laws to govern all people, nations and tongues enforced by the False Prophet and the Imposter!

Each day that passes we are getting ever so closer to the time frame Yahushua referred to as Jacob’s Trouble or some call it The Great Tribulation (to learn more about this time please request our free DVD called (“The Imposter”). Instead of outrage over the Pope’s recent unscriptural teaching, people by the masses are jumping on the Pope’s fan wagon. Here are just a few of the comments left by atheist themselves after hearing the Pope’s message: 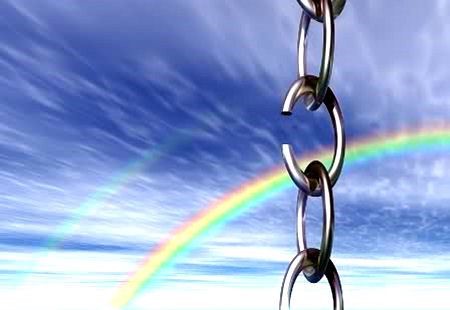 In reality those of us that are in Messiah, know that true freedom can only come from the indwelling of the Ruach Ha Qodesh! Despite Satan wanting to totally enslave each of us, there is a pure unexplained freedom found in Yahushua Ha Mashiach! If you don’t know HIM seek HIM now as time is of the essence. Break free from the bondage of sin. Upon acknowledging HIM, your stony heart will be circumcised with the love of Torah; transforming you into a fountain of love! As the living waters flow within your being others will notice an indescribable radiance within you! Shalom will overcome you. If you don’t know HIM what are you waiting for? Don’t put this off any longer, embrace Yahushua today! Do not believe the Jesuit Pope Francis lies that everyone that does good can inherit eternal life.

One thought on “Being GOOD is GOOD ENOUGH…”