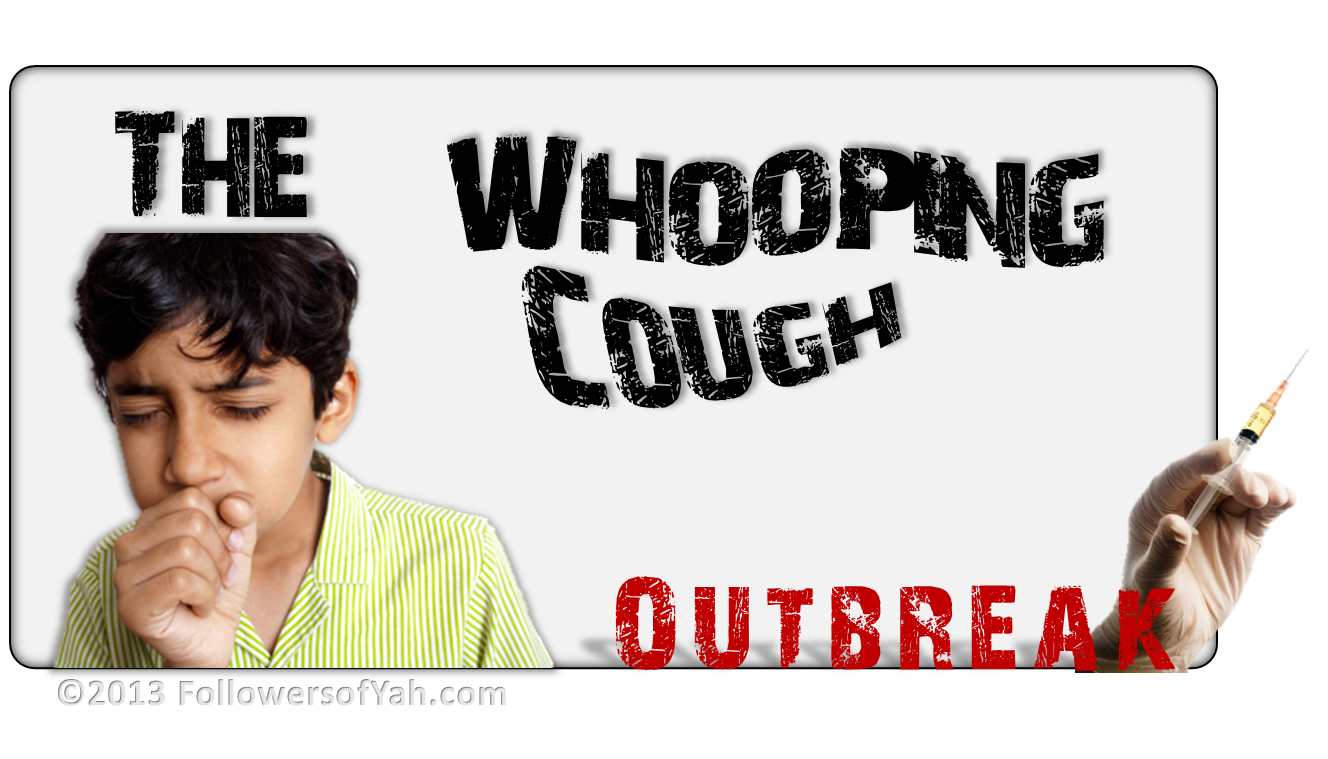 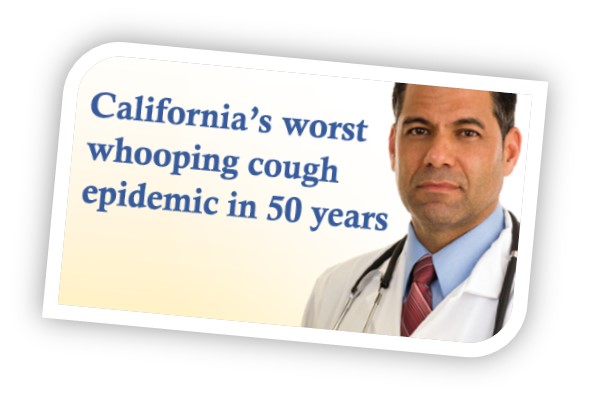 Written by L. McGuire
Many old diseases seem to be on the rise. Some of which are much more powerful, spreading at astronomical speeds and deadlier than ever imagined. These super bugs are making a comeback with a vengeance leaving behind a trail of sickness and in some cases even death. One of these extremely dangerous diseases known as Pertussis (whooping cough) has swept through many states infecting thousands of people. This outbreak of whooping cough has not been this monstrous since 1947. In this day in age, how this deadly disease could spread so fast and easy is beyond comprehension.  We live in a world where anything and everything can easily be antibacterial wiped off. We have access to the strongest disinfecting cleansing cleaners known to man yet something so microscopic can bring entire families, streets, neighborhoods, cities even states bowing to its mercy!

Pertussis (whooping cough) is an extremely virulent disease. When a person first shows symptoms of Pertussis, they may feel like they have the sniffles or a cold. Thinking that is all they have, most continue on with the everyday hustle-in-bustle. They continue to go to public places not realizing they have indeed been infected with the Pertussis (whooping cough) until that dreadful cough begins. A person can be carrying this potential deadly disease and never even realize it. Those with weakened immune systems along with infants are extremely susceptible to this life threatening sickness. In the event an infant does survive, the recovery time is three months before the child is fully over this illness.

Most think of Pertussis as a virus yet when one has to be hospitalized the patient receives strong antibiotics to kill the whooping cough. Despite the strong dose of antibiotic treatment given, sadly much too many have died. Leaving many questions unanswered while the blame game begins. Fingers have been pointing in all directions. Some reports by health personal and scientist have made strong accusations against those parents who refuse to have their children vaccinated. 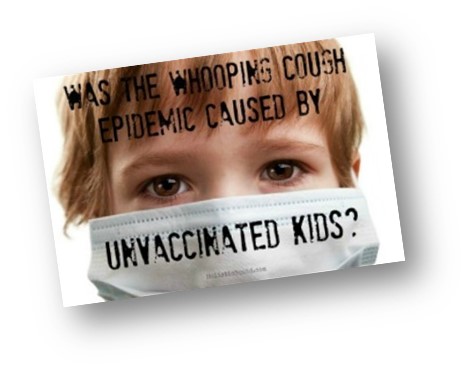 Main stream media has also passed the buck onto those who refuse to be vaccinated. Some reports have stated that the only way to prevent Pertussis from spreading is a community immunity rate of at least 93 percent.

According to the journal Pediatrics experts reported that unvaccinated children was the real culprit in the rapid spread of this current outbreak. Some are even speculating that measles may also be on the rise due to unvaccinated children. Some schools such as Empire High in Pima, AZ would not allow unvaccinated children to attend school related activities for at least three weeks. What is interesting to note is that even the children who received the vaccinations came sick, but with milder symptoms than those who were unvaccinated. Those with weakened immune systems, such as children under 6 months the disease can be fatal. 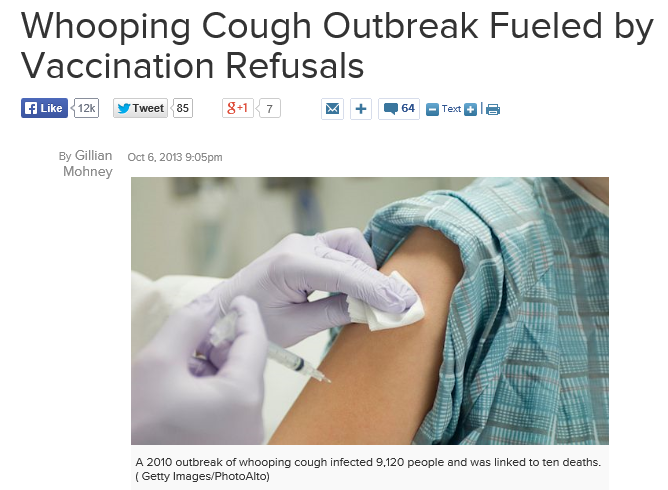 To those of us who know the risks in getting any vaccinations, here they are stating that 93 to 95 percent of an entire community must be vaccinated to keep Pertussis from spreading. Has anyone looked into what is actually in the vaccine?

Most babies receive five doses of the DTaP (Diptheria, Tetanus & Pertussis) by the time they are six months old. Ponder that with each Jap the odds of coming down with whooping cough increases.  The side effects from receiving this vaccines is also worrisome. Temperature can exceed 105, there can be possible collapsewith shock, convulsions, encephalopathy (brain damage) even in some cases SIDS (Sudden Infant Death Syndrome) not to mention getting Pertussis, the whooping cough.

Because of this latest outbreak news reporters reported California health departments offered the pertussis vaccinations for parents at the birthing centers for their newborns. This wave of whooping cough has now sparked California State to make stricter laws for non-medical vaccine exemptions for children. In other words, if it is against your religious beliefs to put deadly vaccines into your child’s body it will now be even harder trying to get them exempt! This will go into effect next year sometime.

Whooping cough outbreak could be Texas’ worst in 50 years 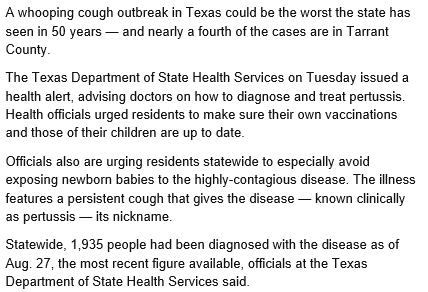 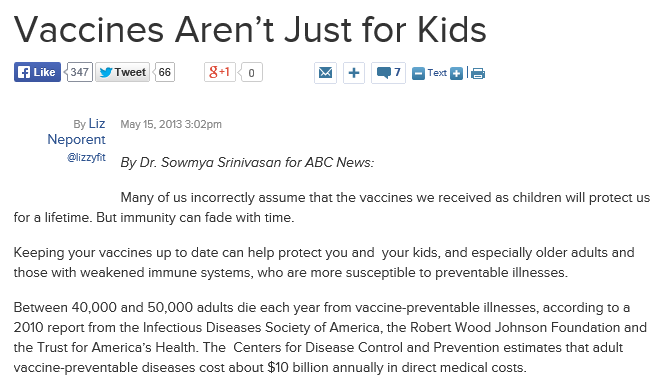 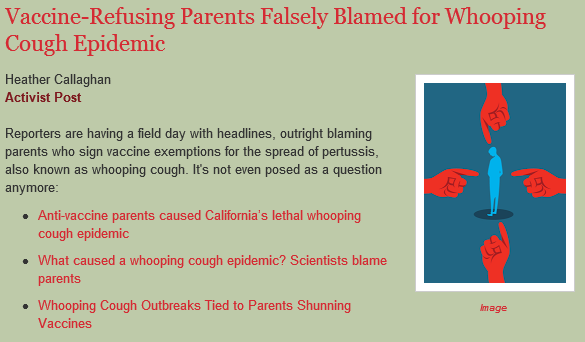 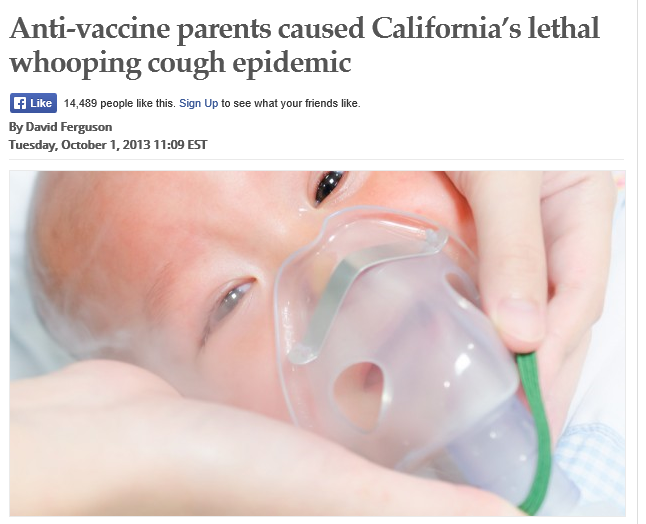 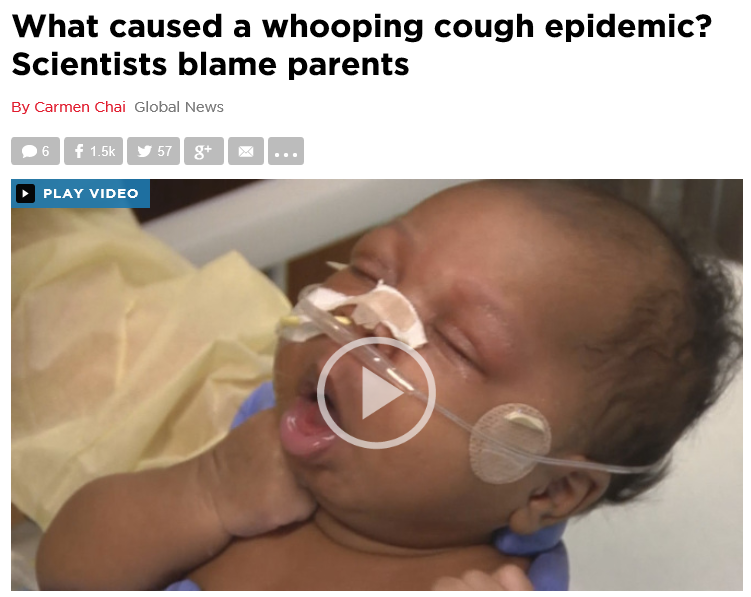 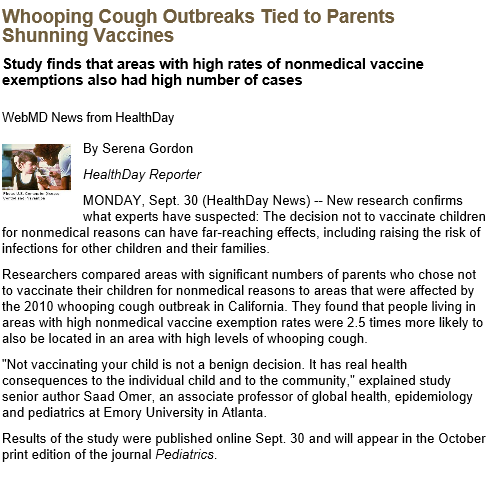 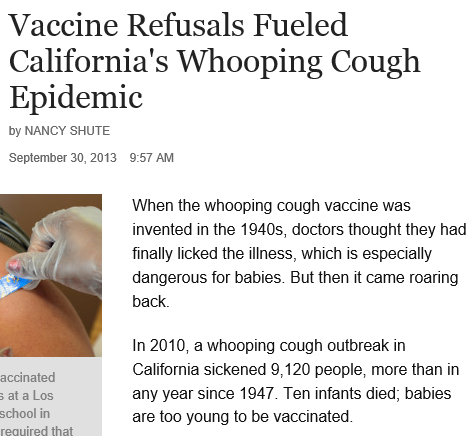 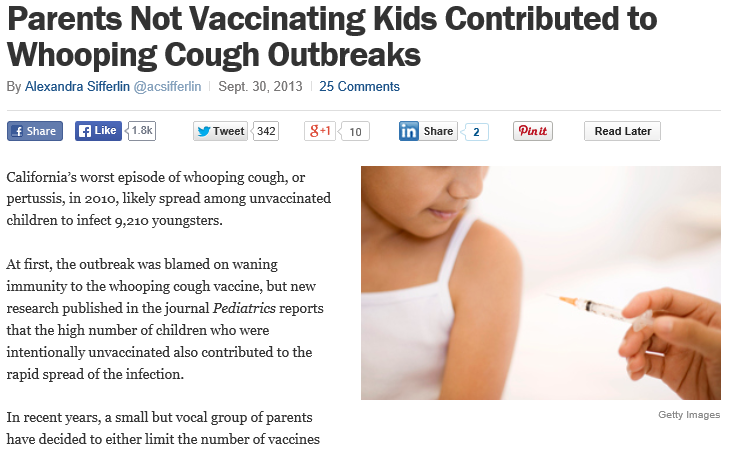 Yet on the flip side reports have proven that those who actually get vaccinated are not only carriers of this deadly disease but can actually come down sick with Pertussis! I personally agree with those reports because when one puts a live virus or even bacterial into their bodies the opportunity of that organism to do what it was created to do is very highly likely. In Dr. James Howenstine report he states the following:

“In 1975 Germany stopped requiring pertussis (whooping cough) vaccination. Today less than 10 % of German children are vaccinated against pertussis. The number of cases of pertussis has steadily decreased[3] even though far fewer children are receiving pertussis vaccine.

In 1986 there were 1300 cases of pertussis in Kansas and 90 % of these cases occurred in children who had been adequately vaccinated. Similar vaccine failures have been reported from Nova Scotia where pertussis continues to be occurring despite universal vaccination. Pertussis remains endemic[4] in the Netherlands where for more than 20 years 96 % of children have received 3 pertussis shots by age 12 months. (source)”

Considering Dr. Howenstine findings, the public should be asking since Pertussis is a highly contagious bacterial disease why would one even need to get vaccinated when antibiotics can treat this sickness? When a person is infected with Pertussis, or  whooping cough the bacteria spreads by coughing and sneezing.

Vaccines are nothing to mess around with. These potions full of unthinkable ingredients are causing serious and debilitating illnesses including death to many people of all ages. A young man from Utah recently lost his life due to the flu shot that millions get every year. Chandler Webb who was going on a mission trip for his church received and the very next day he became extremely ill. A week later he went into a coma never to come back out! Tragic stories like this are become the norm with all the junk being put into these vaccines. 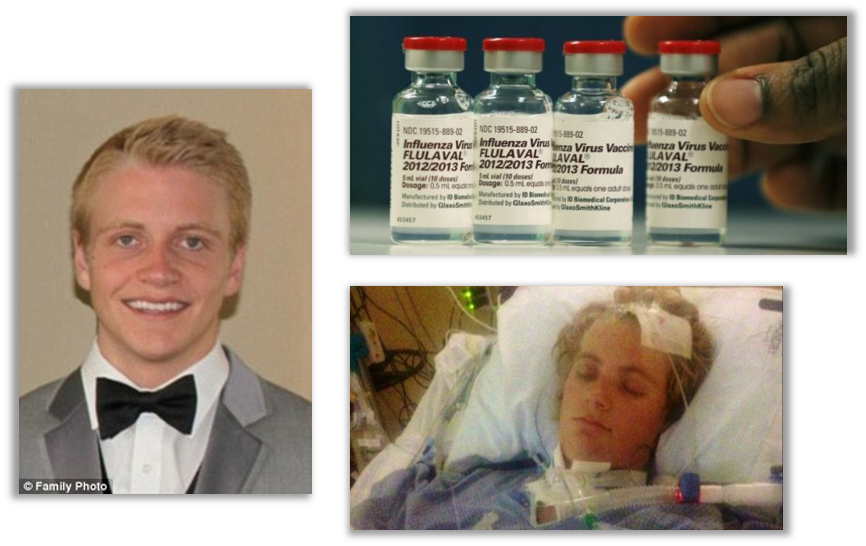 How devastating this must be for the entire family, friends and loved one. I strongly suggest that if you desire to be jabbed then please look into all the possible side effects that can occur with any vaccine.

British scientists are working on the ‘holy grail’ of all flu vaccines. This universal flu vaccine would hopefully tackle all strains of the flu vaccine: 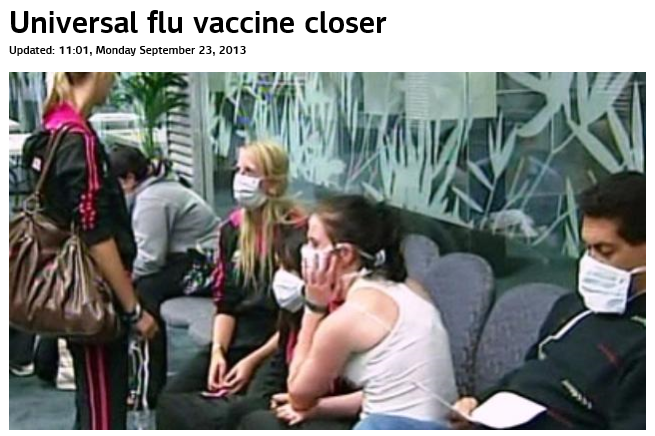