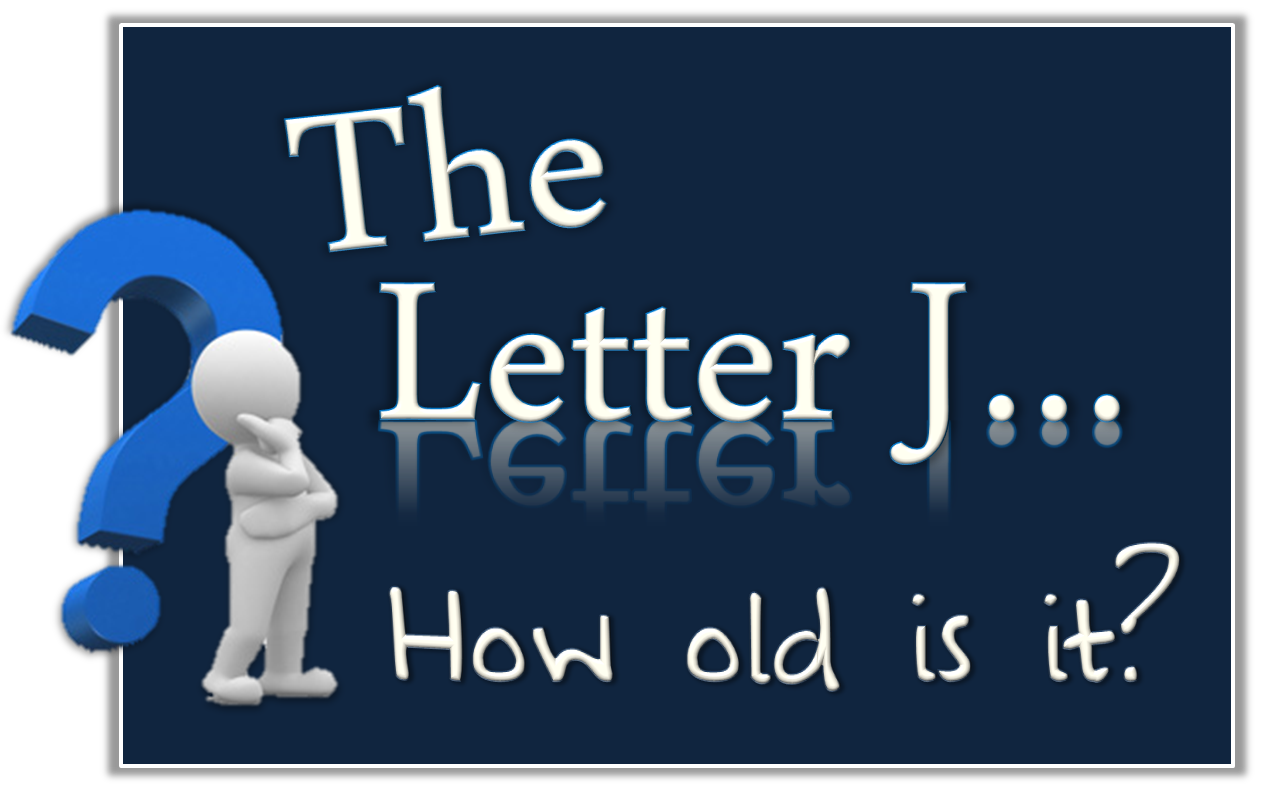 In the English Alphabet, the letter “J” was originally used for the letter “I”. The first to distinguish the difference between the letter “J” and the letter “I” was in Gian Giorgio’s 1524 “Trissino’s Epistola del Trissino de le lettere nuwvamente aggiunte ne la lingua ialiana” (Trissino’s epistle about the letters recently added in the Italian language) “I” and “J” were originally the same letter but different shapes both equally the same letter. However, poets began to use it developing new sounds for “I” and “J”. According to the history of the English Alphabet, the official and original sound of the letter “J” was the sound of “Y” in “yet” or “yellow”. How-ever, the very first English-language book to make clear distinction between the sound of “I” and the sound of “J” was not written until 1634. It wasn’t until then, after the 1611 Bible was published, that the English language officially accepted the shape and sound of the letter “J” as “jay” and no longer the “yuh” “Y” sound.    There is not now nor was there ever an equivalent letter “J” in all the 22 letters of the Hebrew alphabet. Nor is there any Hebrew letter that carries even an approximate sound of the consonant letter “J”. Neither is there a letter “J” in the Greek alphabet.

When you sing and praise, do you not speak Hallelujah? How do you pronounce it? Did you know, Wycliffe’s Bible, does not have it spelled Hallelujah, but rather “Alleluia” but it is pronounced Ha-le-loo-Yah. This is the reason we write it as “HalleluYah”. In Hebrew, it means Praise be to YAH!

We received an email informing us that the letter “J” is found in Wycliffe’s Bible dating to the late 1300s. Wycliffe’s Bible was ONLY a translation of the New Testament AND was not from the original Hebrew and Aramaic, but of the Latin Vulgate. The 1611 KJV Bible was the original most known and accepted translation of the Bible. And this Bible has absolutely no letter “J” in it. The name Jesus is simply a combination of the Latin and Greek IESOUS. Please note the similarity between the Greek IESOUS and pagan deity of Zeus. As we have discussed, there isn’t even a letter or sound of “J” in the Greek Alpha-bet. While the historical references are foggy about when the initial and exact time the letter “J” sound came into existence in the English language, the window is sometime between the 1500-1600s. This current modern translation of what the world uses, “Jesus”, did not exist until roughly 500 years ago. 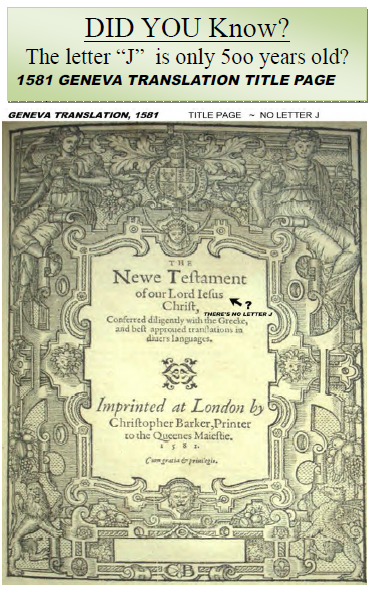 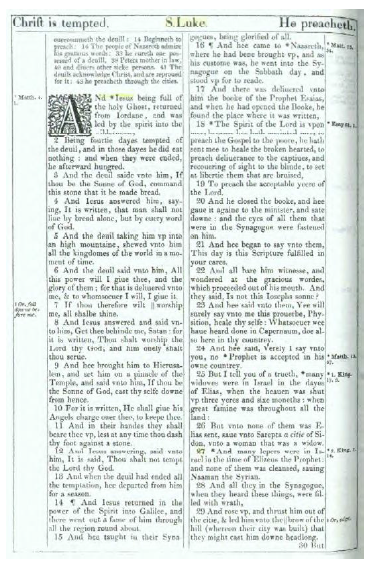 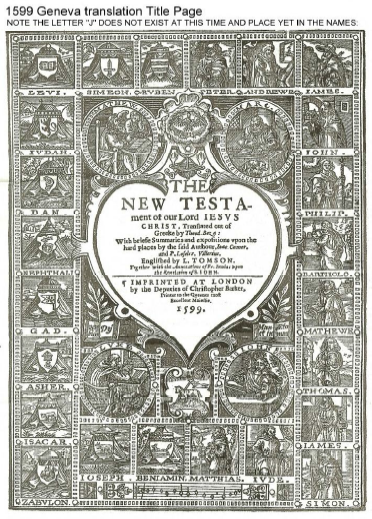 If the letter “J”, its shape and sound is only about 500 years old, what was the Messiah’s Name? We must ask ourselves, how could He have been called Jesus if this version of His Name did not even exist two thousand years ago? What was His Name? Is that Name still usable during this current generation? We here at the F.O.Y. Ministry believe it is indeed usable.

We know the Messiah did not speak English, nor did He speak Greek. What we should find fascinating is that we do know the language He spoke about 2,000 year ago. Turn with me to the great book of Acts:

Clearly the Messiah spoke in a Hebrew language when Paul (Sha’ul) was stopped on the road to Damascus.

HalleluYAH, the language the Messiah spoke and Paul (Shaul) heard was in the Set Apart Tongue, the Hebrew language. The Messiah spoke His Name in Hebrew not Greek. Did you know, the Name Yahushua actually tells us who saves: “Yahuwah Saves” (Psalms 68:4)

Now we know there was no letter “J” in Hebrew, Arabic, Greek and Latin language! The Name above all Names could not begin with the letter “J” as this letter did not exist some 2,000 years ago. The letter ‘J’ is only 500 years old.

These are the letters of YHWH (HWHY): YOD, HAY, WAW, HAY, read from right to left:

Throughout Scriptures we find clues that reveal to us the Father’s Name. Leah’s fourth child’s name, Yahudah/Judah, in Hebrew is: YOD-HAY-WAW-DALETH-HAY. This name carries the Father’s Name, Yahudah. Drop the DALETH and we have the Father’s Name, Yahuwah. The Name Yahudah means, “Now I praise Yahuwah.” (Bereshith/Genesis 29:35) Many scholars of the Hebrew Scriptures acknowledge this as well, (Keil and Delitzch, Procksch, Lewy, Albright, Millard and Zorell). We also know that HIS people will bear His Name. That is why they were called Yahudim, not the corrupted Jews (remember there are no J’s in the Hebrew). They were also called, “Yahoo’s”. Many of the prophets also carried the Father’s Name. For instance:

The Messiah spoke Hebrew. In fact, the Messiah was indeed Hebrew. Was raised in a Yahudim home and was a Yahudim (Jewish). He even tells the Samaritan woman at the well that He is a Yahudim (Jew) in Yohanan/John 4:22. Just as there are clues for what Yahuwah’s Name is, there are also for the Son, Yahushua. In Shemoth/Exodus 23:21: “My Name is in Him.”

Doesn’t it make you wonder who is this man everyone calls Jesus? How did he end up in the picture and why was the Messiah’s true Name forgotten? Remember, The Father’s Name is in the Son’s Name. If they hated the Father’s Name, they hated the Son’s Name also. The story doesn’t end here. For further studies on the Father and Son’s Name, we beseech you watch our movie The Great Conspiracy, along with They Have Despised My Name. To learn about the Father’s Name, read our book, HaShem (The Name), watch our short four minute video called HaShem (The Name). To learn about the Messiah’s Name, read The Name Above All Names.

For your convenience, we have embedded our videos below.

This is available freely on DVD via our order form.

They Have Despised My Name

This is available freely on DVD via our order form.

Don’t forget to read book, HaShem (The Name) and The Name Above All Names for further study also.

Yohanan (John) 5:43, “I am come in my Father’s Name, and ye receive me not: if another shall come in his own name, him ye will receive.”

Print this as a tract! Download The Letter J Tract!

One thought on “The Letter J”