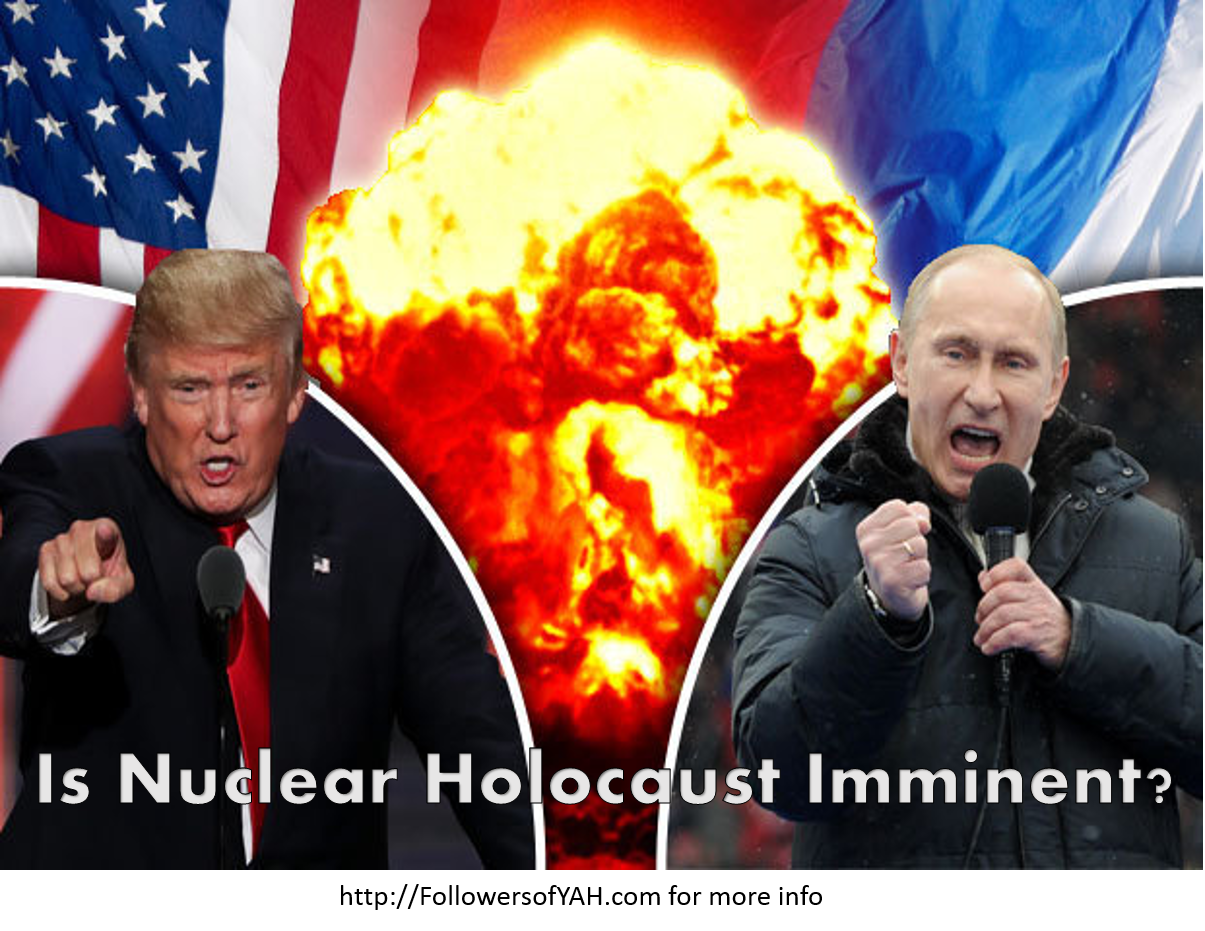 “And you shall begin to hear of fightings and reports of fightings. See that you are not troubled, for these things have to take place, but the end is not yet. For nation shall rise against nation, and reign against reign. And there shall be scarcities of food, and deadly diseases, and earthquakes in places. And all these are the beginning of birth pains.”-Matthew 24:6-8 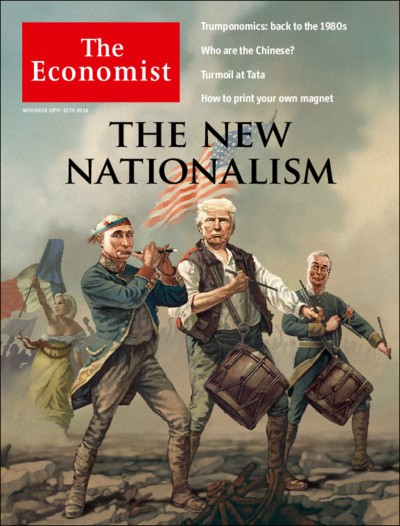 The drums of war are beating! The great standoff between Russia and the USA has begun. How did the two super powers of the world get to almost a point of no return? Or have they already reached that point of no return? No one really knows for certain. However, time is of the essence in knowing the results of how this dangerous predicament will turn out. Will Russia detonate the first bomb? Then again, could there be some computer glitch that just makes everything go haywire! That will leave billions of people dead and many more wishing they had died in the blast! Without a doubt President Trump, along with Russia President Putin holds the power to annihilate the world at their fingertips! As outlined in “You got Trumped” both Presidents are puppets in this sinister but not so secret agenda!  How can this be you ask? Like a great game of CHESS, the majority of people just so happen to be the pawns! Which are easily moved, taken out, disposed of and manipulated in this “Planned Armageddon!”

.
For months now many countries have been on a heightened alert for all-out WAR!  Just a few months ago Germany, Russia and even the United States warned citizens to prepare for war:

Both Russia and NATO are still in the position to unleash global-scale nuclear attacks – and ready.

7 Ways Russia Is Telling People to Prepare for War

Almost no one believes the Kremlin is actually preparing for a military conflict with the United States. Most analysts instead see it as a show, intended to boost support at home and to deter Western countries from intervening militarily in Syria.

Do you see how the Illuminati plans are right on schedule? They knew months ago that we would be at this moment in time! And now Trump and Putin are just waiting for the luciferin elite to pull their strings by given the say so of the next move! Beloved ones, what we have here is paid actors that are taking their citizens for a ride! I beseech each and every one of you NOT to be sucked into this fearmongering!

.
Let’s face it, we are living in very turbulent times! The Syrian chemical attack was another planned event to infuriate the masses by seeing so many having to die by an attack.  Innocent sweet children being seen hurt while people frantically try to save as many as they can! A total of 70 people including children died! Some claim this was a false flag! Regardless, of what rumors would have it, children were involved! So, whoever was truly responsible for such a hideous horrendous crime against the innocent are pure evil! The following is extremely graphic. (I personally did not look at the video’s or the pictures)

I mean who could sit back and allow something like this to occur, to children? That was enough to get the United States involved as President Trump stated:

“It crossed a lot of lines for me. When you kill innocent children, innocent babies … with a chemical gas that is so lethal that people were shocked to hear what gas it was, that crosses many, many lines — beyond a red line,” he says.

Who would not agree with his statement? With that said, by Friday President Trump gives the okay to launch 59 cruise missiles at Al Shayrat airfield!
What we should take special note is that the same day the US launch the missile attack is the same day the United States entered WWI!

Tension is rising and that is all part of the organized chaos! 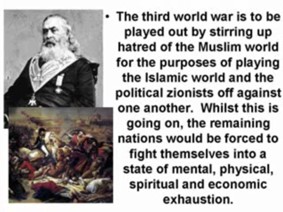 Let me further removed the blind-fold by sharing Albert Pike (a 33rd degree Freemason), who wrote “Morals and Dogma” quote about the third world war! “The third world war is to be played out by stirring up hatred of the Muslim world for the purposes of playing the Islamic world and the political Zionists off against one another. While this is going on, the remaining nations would be forced to fight themselves into a state of mental, physical, spiritual and economic exhaustion.” That is exactly what we see occurring right now! Currently, tensions are raised from multiple countries.

.
North Korea has threatened to reduce the US to ash:

,
North Korea does have the ability to nuke Alaska and Hawaii.  They are recently pranced their weapons of mass destruction in what they called, “the day of the Sun”.

Now add if North Korea can set submarines on both coasts then, yeah this could be a problem!
.
The Russians also have a nuclear weapon called “Satan 2”. This bomb can take out the entire state of Texas:

Russian planes were also seen with higher than normal activity by Alaska.

.
Another interesting point is that China recently completed a giant statue of a war god.

.
Just a few months ago, Iran stated that when the Mahdi come back, he will defeat the US in World War III.

That war beloved ones, is the PLANNED ARMEGEDDON!  Right at the climax who do you think is showing up? Guess again????? Stay with me, as I explain what a Planned Armageddon really is.

The Euphrates river has also been drying up for the last few years.

.
Now considering all these matters, step back and behold the signs of the times, beloved ones! Do you have eyes to see? Can you discern? The secret elite, are thriving off the fear of the people! Everything we see right now, is their doing. As outlined in “The Imposter” and “The False Armageddon” when all nations are in war, then we will see the Strong Delusion take place. Which is the Imposter coming in the clouds, pretending to be Jesus Christ! When you see, the Imposter coming in the clouds, I want you to remember, “the end is not yet.” (Matthew 24:6). The Strong Delusion will appear to be the end but in reality, it will be the start of Jacob’s Trouble, the Final Great Crusade, the Great Tribulation and will be the worst time in all of history!

So, does this mean, the United States will be totallly annihilated? I don’t think so. Because, Satan wants the entire world to worship it! However, we could possibly see a few weapons of mass destruction go off here and there. In the event an EMP was to go off, the American people would literally be left in the dark. The country could easily be wiped out from coast to coast as foreign invaders charge from both coast. Unprepared, no one would know what was occurring until it was too late. Then again, we may not see any go off. This all good be all bark and no bite! Just to keep the people controllable with fear mongering! See right at that climatic moment, of the Planned Armageddon (False Armageddon) when all chaos will be unleashed, then the Strong Delusion will occur. If satan was to destroy the world especially the United States through a nuclear holocaust then there would be no one to worship it. Furthermore, Yahuwah will not allow man to total annihilate planet earth! The “Strong Delusion” will be so massive that it has been written, “…if it were possible even the elect” (Mark 13:22)! Because of the great illusion, Yahushua asked, “…But when the Son of Adam comes, shall He find the belief on the earth? ” (Luke 18:8).

.
We truly are on the brink of the False Armageddon breaking forth any day! I beseech you to remember that we, “walk by belief, not by sight.” (2 Corinthans 5:7) Now is the time, beloved ones to prepare! Prepare your hearts, minds and especially spirituality for the time is at hand!
In closing, let us not forget that we have a promise. Yahuwah has told us, “Do not fear, for I am with you. Do not look around, for I am your Elohim. I shall strengthen you, I shall also help you, I shall also uphold you with the right hand of My righteousness. “-Isaiah 41:10
Let us also consider the following promise:

“He who dwells in the secret place of the Most High, who abides under the shadow of the Almighty, He is saying of Yahuwah, “My refuge and my stronghold, My Elohim, in whom I trust!” For He delivers you form the snare of a trapper, From the destructive pestilence. He covers you with His feathers, And under His wings you take refuge; His truth is a shield and armour. You are not afraid of the dread by night, Of the arrow that flies by day, Of the pestilence that walks in darkness, Of destruction that ravages at midday. A thousand fall at your side, And ten thousand at your right hand; But it does not come near you. Only with your eyes you look on, And see the reward of the wrong ones.” -Psalm 91:1-8

One thought on “Is Nuclear Holocaust Imminent?”