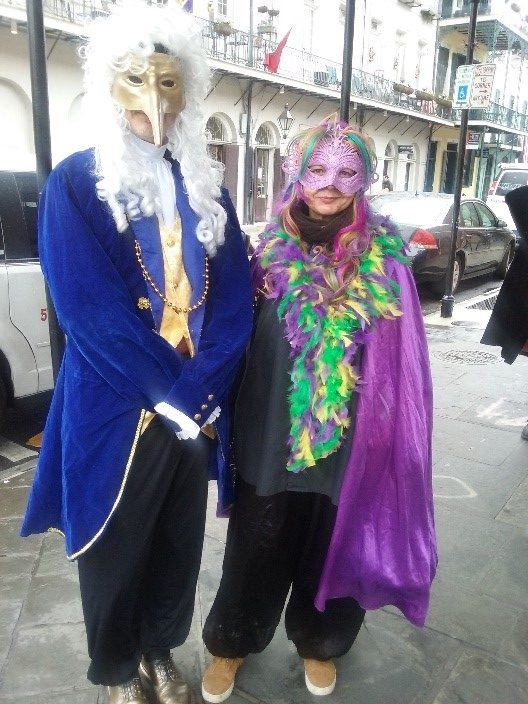 We are so thankful, that we had this opportunity to do some street witnessing down in the French Quarter of New Orleans. One time while we were on Royal street, when we were fixing to leave, we noticed lots and lots of people were starting to gather in the street. Brother Michael walked down that way to find out what was going on! To our surprise, we learned from this couple in the picture, that 3,000 people were about to be in a marching Mardi Gras parade! Mardi Gras, Fat Tuesday was weeks away and that is how we learned that the Carnival seasons last for quite a few weeks. They also shared with us that anyone and everyone was more than welcome to line up and walk the parade. We didn’t stick around to be in no parade nor did we stay to watch the parade. However, we did manage to snap a few pictures before the parade started! 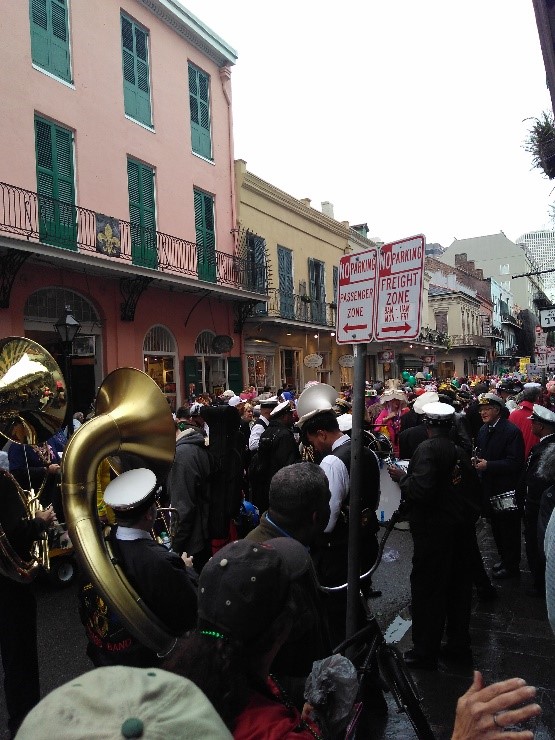 Look at all these people about to walk in a Mardi Gras parade. Just think this parade didn’t offer any big fancy floats but people were very eager and excited to walk. This crowd of people was like that for many blocks, as far as we could see! All these people, and this is not even a float parade on Mardi Gras day! Wow!!!!

Another view of the street line up for the walking Mardi Gras parade on Royal Street in New Orleans.

This man took a selfie with Brother Michael. I think he was part of the marching band. 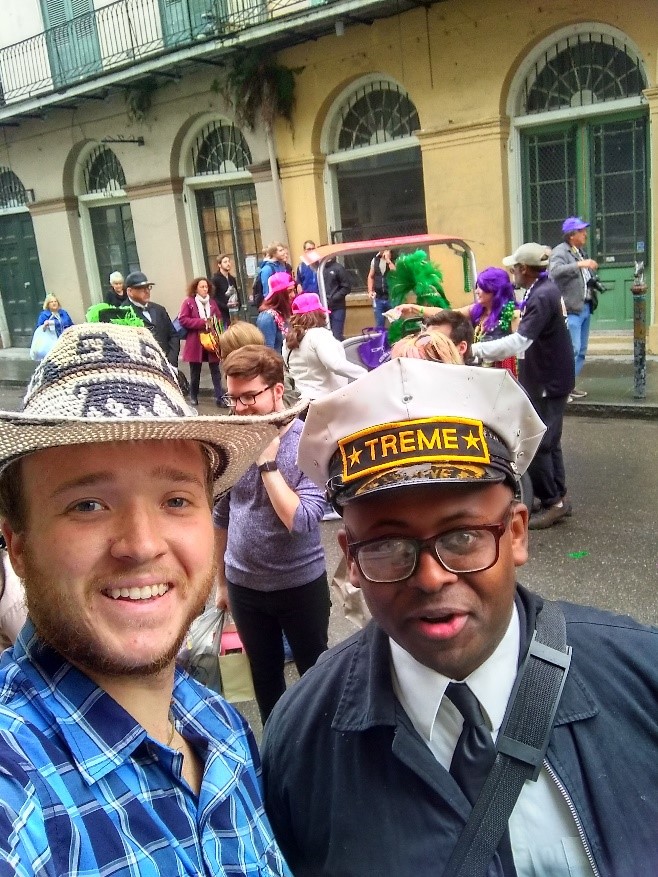 These people were very happy and colorful. I didn’t get around to asking them what they thought of Mardi Gras but from the looks of it, they are enjoying themselves: 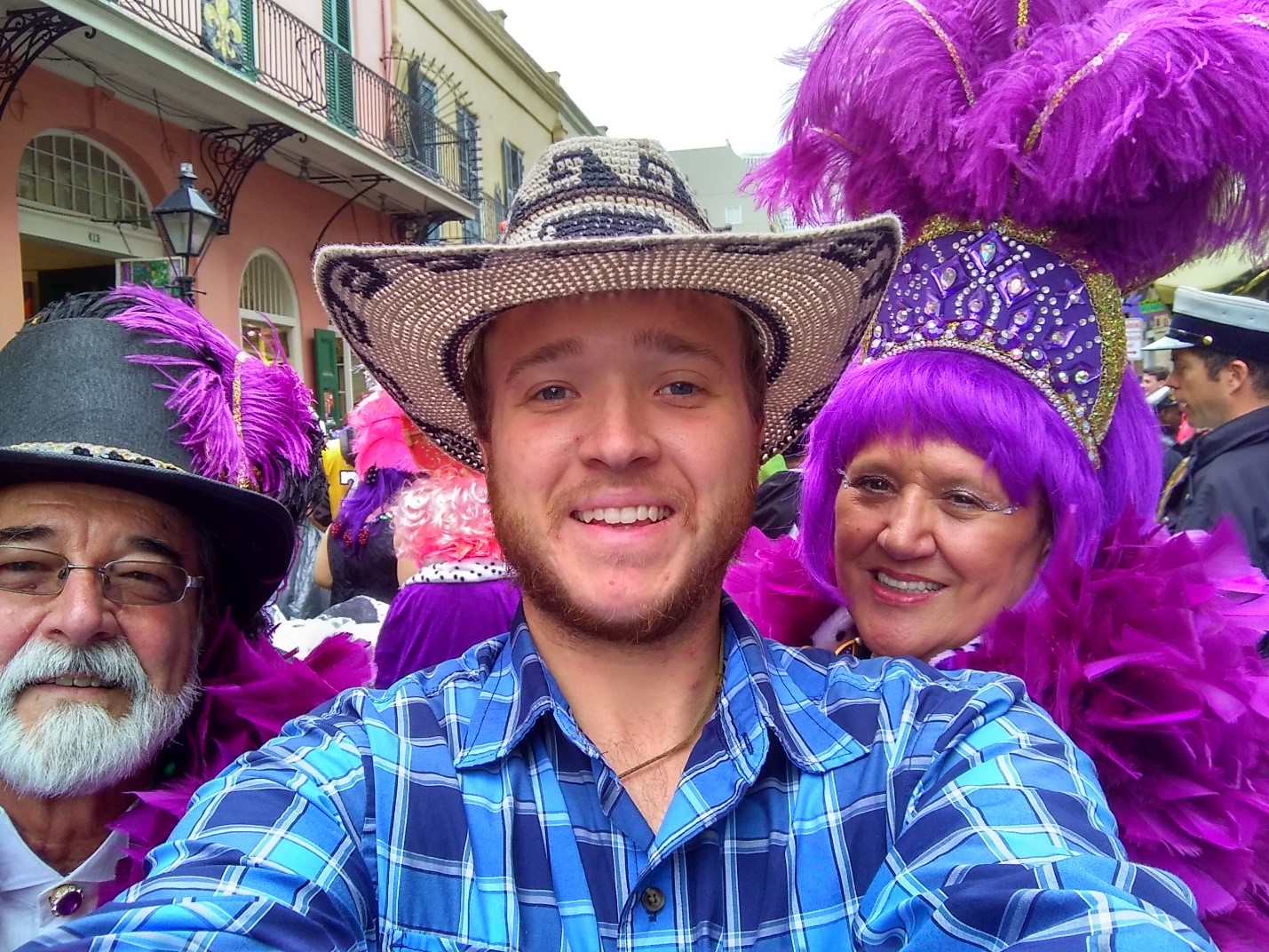 This group we managed to take a quick snap, these are all men dressed up like women:

People didn’t care that it was raining. No rain was going to stop this walking parade:

This group was called, Krewe of Cork! Took me a while to realize that this was ‘cork’ as in wine! Mardi Gras like many other pagan fertility festivals, allows people to be fully intoxicated. As you can see, they are filling up getting toasted right there in the middle of the street.  Good thing they are walking I guess huh?

I think this man was also in the Krewe of Cork group. He might have been the king of the cork, I don’t really know off hand but we did manage to snap a picture of him. Seems like another happy guy: 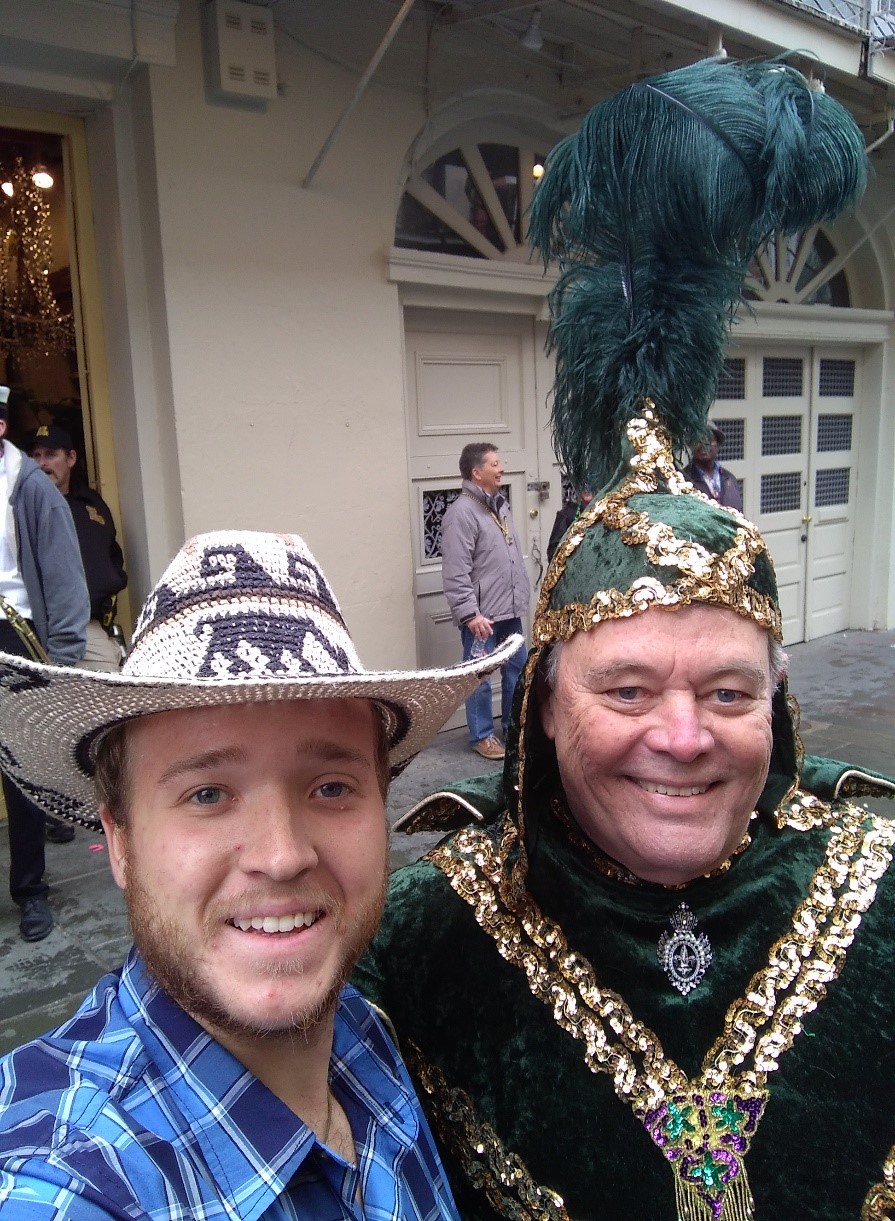 Well time for us to head on out of here! Glad, we got to share with you all at least one Mardi Gras Parade from New Orleans. Wasn’t planned nevertheless you get a glimpse of how crowded the Mardi Gras parades down in New Orleans get. 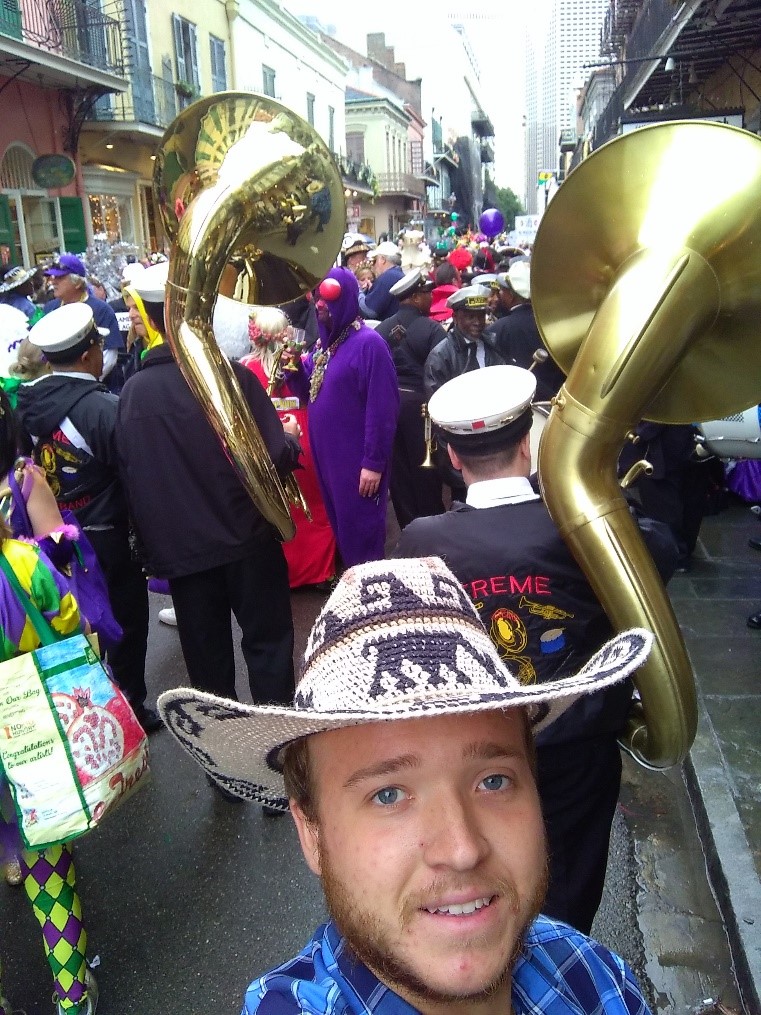 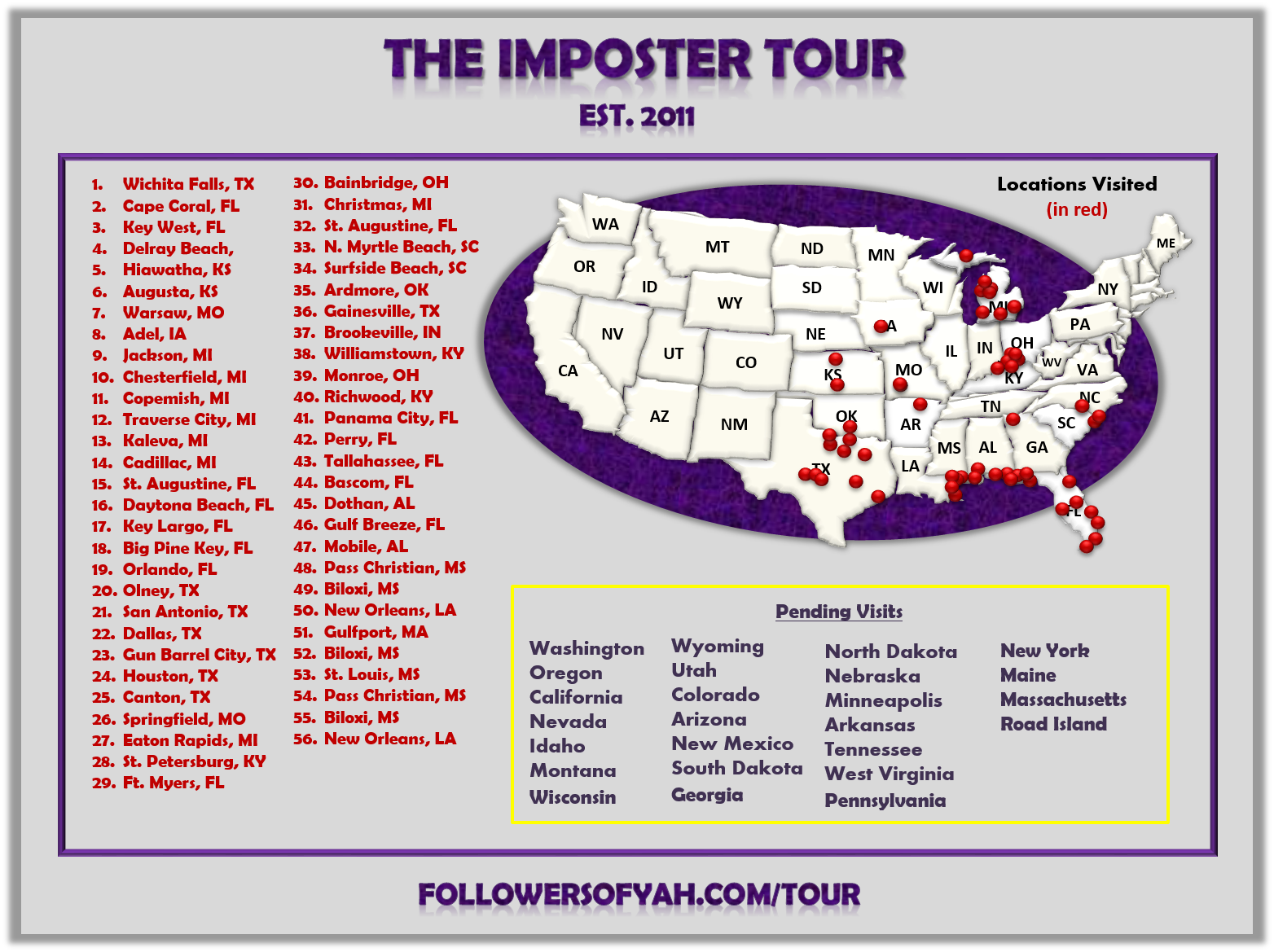